We use your information, collected through cookies, to improve your experience of our website, analyse how you use it and, if you choose to accept all cookies, show you relevant ads. Only the absolutely necessary cookies will run in order to operate this session for you. You do not have to accept all of the cookies used by our website.
February 23, 2021

Gas Demand at highest point in over a decade 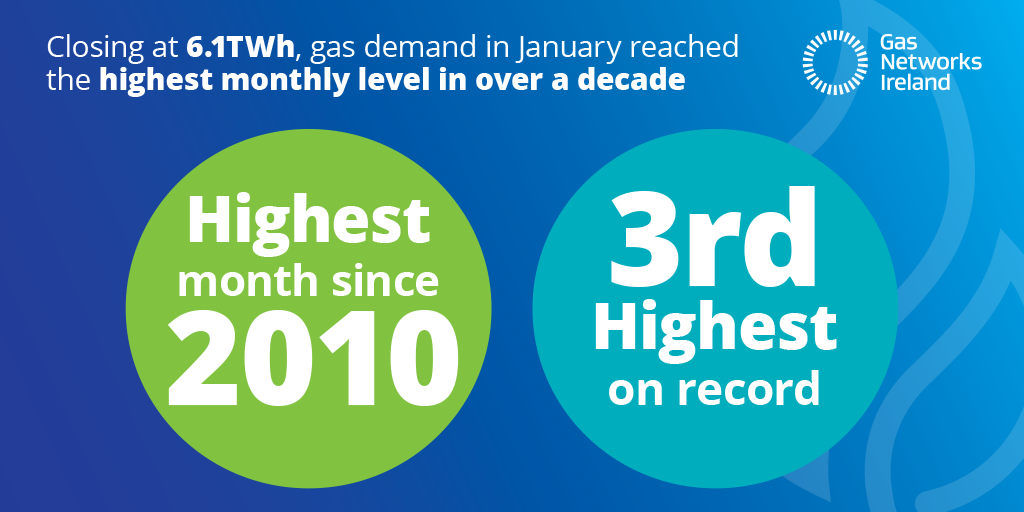 Gas demand in January reached the highest monthly level in over a decade and the third highest ever, according to figures released by Gas Networks Ireland, despite the impact of ongoing Covid-19 restrictions on the economy.

Total gas demand grew 7% month on month to close at 6.1 TWH. This is 12% higher than the same month last year, prior to the beginning of the Covid restrictions.

The only time gas demand was higher in Ireland was in 2010, when the country experienced some of the coldest weather on record. A number of days at the beginning of January 2021 saw demand close to record levels.

Residential gas demand was up 8% on December and 10% on January 2020. Gas Networks Ireland recently reported that 2020 saw over 7,000 new residential connections to the gas network.

There were tentative signs of companies preparing for the return of construction with demand in this sector up 32% on December and back in line with demand prior to the initial Covid-19 lockdown.

“January was a very busy month for Ireland’s gas network, with demand reaching levels not seen in a decade. Overall energy consumption was high; electricity, industrial processes and heating were all generating significant demand. Had we seen more pronounced cold weather in January we almost certainly would have seen a new record for total system peak demand.”